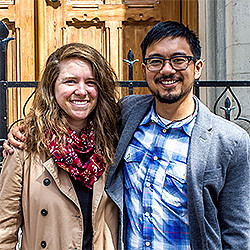 Josef and Euphrosini (Adrienne) are both Californians and converts to Orthodoxy. Josef grew up in a devout and active Christian household, while Euphrosini grew up in a non-religious one. After a period of searching for truth and meaning at university, God lead them to the fullness of the faith in Orthodoxy.


Josef studied Psychology at UC Davis with the intention of becoming a therapist. Upon becoming Orthodox, his understanding of the human being, the soul (psyche), and healing (therepia) became more complete. It was then that he first felt the calling to the priesthood. His pilgrimages to Greece and five years of teaching, both in Europe and in California, pressed upon him two things: the great wealth of Christian spirituality and truth we Orthodox have to offer, and the tragedy that the Post-Christian West now thirsts for something it has abandoned.

Euphrosini’s love for the beauty in God’s Creation lead her to study graphic design at SDSU. It was her sensitivity and openness for beauty and truth that instantly drew her to Orthodoxy upon attending a Vespers service for the first time. The friendship and sacrifice that her future godparents showed her by driving so far to take her to church and spending time with her to teach her about the faith showed her what it means to be a Christian.


Josef and Effy got married in 2014 and spent part of their honeymoon visiting the Ritsi family missionaries in Albania to see first-hand what missions work is like.

From 2014–2016 they served as the coordinators for the Pan-Orthodox San Diego Orthodox Young Adults group (SDOYA) for which they planned regular religious, social, and educational gatherings, monastery pilgrimages, and service events, including weekend trips to St Innocent Orphanage. Through these experiences, and the encouragement of their spiritual fathers, they gradually began to discern their calling to be foreign missionaries.


In 2016, the Candelarios moved to Thessaloniki, Greece to learn the Greek language, study Theology at Aristotle University, and be trained in liturgical arts: Byzantine chant for Josef and Iconography for Effy. During this time, they also served on various short-term missions trips and youth-camps in Albania and in Sweden.

The Candelarios have answered the call to serve the Metropolis of Sweden in Stockholm under the leadership of His Eminence Metropolitan Cleopas, where Josef will serve as a Pastoral Assistant at the Cathedral as well as continue his work in Youth and Campus Ministries, while Effy will offer her talents as part of the Internet Ministries team.

Please join them in this effort to bring the light of the Gospel to God’s children in the North by praying for them and supporting their work financially with a one-time gift, or a monthly-partnership.

Follow their story, and how your prayers and support are unfolding in the field, here:
https://candlesabroad.wordpress.com/