Missionaries Serving in Romania and alaska 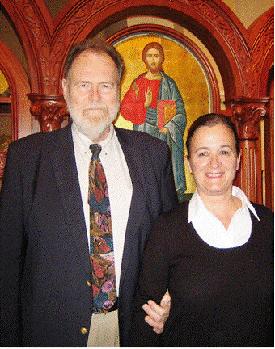 Floyd Frantz became interested in serving as an Orthodox missionary in 1998, after attending a presentation by former OCMC missionaries Craig and Victoria Goodwin about their work in Romania. Their report about the high level of addiction amongst the young people living on the streets in Romania interested Floyd, who by profession is an addictions counselor. That same year while on a fact finding trip to Romania he noticed not only the high alcoholism rates, but also the poverty and general need of the population in Romania. There were no treatment programs for alcoholism, and generally alcoholics were looked on as being a lost cause, even by the Church. As a response to this in November of 2000 he began the St. Dimitrie Program in Cluj, Romania, and since that time he has been developing education and alcoholism treatment programs through the Orthodox Church in Romania. Much of his work is with the homeless and disenfranchised of the society, especially those in hospitals and institutions. Currently the St. Dimitrie Program has a day-center/social cantina in Cluj, and does counseling in two hospitals and an out patient clinic. It also has a weekly information and counseling program at a high security prison in Gherla, Romania. Their education program is active throughout Romania and parts of the Republic of Moldova, and is now partnering with the "National Anti-Drug Program of the Romanian Orthodox Church", of which Floyd is a coordinator.

Floyd's lovely wife Ancuta is a native Romanian and is the director of the Protection of the Theotokos Family Center. Started through OCMC in 2005, the Protection Center is aimed at the prevention of child abandonment. According to official Romanian statistics, in 2006 there were over 7,000 children abandoned by their families in Romania. Ancuta's day-care and counseling project works in conjunction with the local child protection agency and the Orthodox Church to minister to new mothers by offering counseling and material support so that they will not abandon their children due to poverty or feelings of hoplessness. Currently the center is serving 18 children and their mothers.

Working through OCMC and the Romanian Orthodox Church, the Franztes thank you for your continued prayer and financial support.