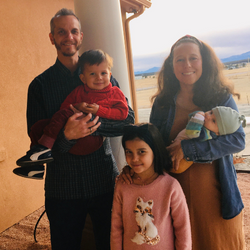 Phil and Kristiana grew up in New Mexico. When they began dating in 2011, they discovered a common interest in international missions. They have three children: Irene (8), Simon (3), and Miriam (10 months).

Phil served as an Evangelical missionary for several years in the Middle East. During this time, while learning about Islam and Judaism, he realized he knew very little about the classical Christianity that had existed before the Reformation. After a couple of years of intense prayer and study, Phil was received into the Orthodox Church in Albuquerque, New Mexico in 2010. He obtained a Master of Theological Studies from the University of Notre Dame and a Master of Divinity from St. Vladimir's Orthodox Theological Seminary. In Southeast Asia, Phil will be lecturing at the St. Paul Theological School and teaching the Faith to youth at local Orthodox schools.

Kristiana went on a short-term mission trip to North Africa in 2008 and discovered a deep love for cultures and missions. She has a Bachelor's in Biochemistry and Foreign Languages as well as studying Biochemistry at the graduate level.

The McClanahan family will worship and serve at a local Orthodox parish, while striving to share the Gospel with the Southeast Asian people through their lives and words.

Please join the McClanahans in participating in God's work in Southeast Asia, through your prayers and support.