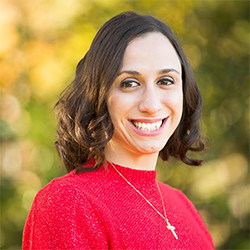 In between short-term mission trips, Elaine served at parishes, coaching youth volleyball teams, volunteering with homeless ministries and participating in a New Orleans home build with International Orthodox Christian Charities. Additionally, Elaine has interned with Athletes in Action, a sports ministry based in Ohio; assisted her mom with her Sunday School class and helped with special needs, urban and human trafficking ministries.

While writing a Christian fiction book (she’ll finish it someday!), she visited missionaries in Central Asia for research, and was greatly inspired by God’s work and how He was using them to further His kingdom in such difficult, closed countries. This trip reignited a fire for missions in Elaine’s heart, leading her to the Home of Hope in Albania with OCMC. Elaine fell in love with Albania, the children at the home, and OCMC.

Over the years, Elaine would periodically look at www.orthodoxjobs.com to see how she could serve the Church in a full-time capacity. She returned from Albania and did the usual job search and came across an ad from OCMC for missionaries in Sweden. Elaine kept scrolling and eventually closed the window. Weeks later, she revisited the website, stopped at the same ad and clicked it out of curiosity, but still thinking, “I’m not going to Sweden.” The internet ministry role perfectly matched her skills from her experience at Newsday. After much prayer and deliberation, the Lord has led her to serve in Sweden, a place she visited in June 2019 and immediately felt at home!

Elaine will be using 10 years of journalism experience to preach the Gospel and spread the message of Orthodoxy in the digital world. Her efforts will support the Metropolis of Sweden and its ministries, as she does in-person outreach and builds a multi-platform online presence that inspires parishioners to grow spiritually. Elaine also hopes to encourage those she meets in the broader community, as 73 percent of Swedes say they're either "not religious" or "convinced atheists," according to a Gallup poll.

Elaine looks forward to answering the Lord’s call to serve in Sweden under the leadership of Metropolitan Cleopas Strongylis. She hopes you’ll consider partnering with her on this journey in prayer and financial support. By doing so, you’ll not only witness firsthand God’s faithfulness in fulfilling His calling upon Elaine’s life, but also His plan to unite all things in Him. Afterall, “the one who calls you is faithful, and He will do it.” (1 Thessalonians 5:24)