preparing for service in Fiji 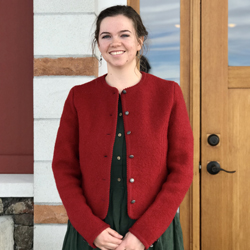 Ruby is the daughter of Greg and Jane Maggard who served as protestant missionaries for 14 years. Born in Arkansas during a mission furlough, she always had two great examples of actively living out the Word of God. In 2002 her family returned to Montana, where they soon were baptized. Ever since then her family has faithfully attended St. Anthony The Great Orthodox Church in Bozeman, Montana. Growing up in the church was a gift she often felt very grateful for.

Over the years Ruby developed her skills in childcare and farming, learning to see Christ in the small moments. Farming vegetables helped implant in her the value of hard work and cultivation of the earth. Childcare helped her learn to lean on the Lord in overwhelming moments.

Ruby had the opportunity to do some traveling in Mexico and Serbia, followed by a year abroad in New Zealand where she was a nanny. While traveling in New Zealand she had a chance to visit the monastery of the Holy Archangels in Levin. The abbot there presides over the churches in Tonga, Samoa, and Fiji. Hearing about St. Tabitha's orphanage filled her with a desire to go to Fiji. As each day passed she realized Christ was calling her to serve in Fiji as a missionary, a thought she had not previously entertained. Over the last year God has opened doors that she never thought possible, and introduced her to people who have inspired her to pursue Christ on this path to the mission field.