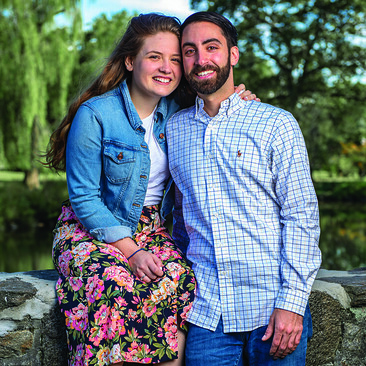 Steve Sarigianis, son of James and Florence Sarigianis, grandson of Fr. Steven M. and Presvytera Electra Sarigianis, grew up in Connecticut and attended the St. Barbara parish in Orange. As a young acolyte he felt urged to serve Christ and His church. In 2010 he graduated from the University of Connecticut with a BA in Psychology, but was unsure about the next step. After a year of reflection & attention to the heart, he was compelled to study theology at Holy Cross, entering in the fall of 2011. Steve served on six short term mission teams and was president of the Missions Committee for three years while at the “Holy Hill.” After his solo mission trip to Guatemala in 2013, he discerned the Lord was calling him to long term mission service. He graduated Holy Cross in 2015 with an MDiv and soon after began working as a Pastoral Assistant at Archangels Church in Stamford, Connecticut, under Fr. Harry Pappas.

Theophani Sarigianis, daughter of Iconographer & Archon Elias and Angela Damianakis, grew up in New Port Richey, Florida. Her family (and in particular her grandfather Nikitas Damianakis), was centrally involved in planting the St. Raphael, Nicholas, & Irene church in Palm Harbor. At a young age he impressed upon her the type of faith & dedication required to grow a church from nothing. The memory of her late pappou, the spirit of these three miraculous Saints, and her family’s guidance helped her make the decision to attend college in Boston; she entered Hellenic College in 2012. Her keen interest in religious freedoms at the Ecumenical Patriarchate lead to her developing interest in Orthodox mission work. As a student Theophani quickly became involved in the campus Missions Committee and explored a vocation in missions while making several short-term trips. This was affirmed on her first trip to Kenya in 2014. Later in 2016, she graduated from Hellenic with a BA in Religious Studies. She is active in parish life, primarily with youth ministry, Sunday School, and Seniors ministry.

Steve & Theophani first met in 2012 at Hellenic College Holy Cross. They shared a calling to serve Christ as missionaries and from this developed a close friendship, and in time a loving relationship. After completing their studies, the two served together on an OCMC team to Kenya in 2016 lead by the late Bishop Athanasios Akunda. He would later marry them at Holy Cross chapel in 2017.

They humbly request your prayers and your support as they actualize their calling, and work to strengthen the church & share the Good News of Christ.