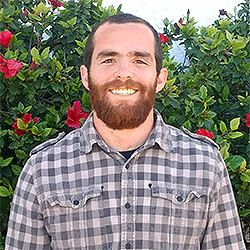 Thomas grew up in Huntington Beach California in a Catholic family and had a catholic education up until college. While attending Catholic high- school, he and his family were actually participating more at Protestant churches as their Catholic faith seemed to have faded away. After his sophomore year at a Quaker University in Oregon he was church hopping not knowing what church was best for him and it was that summer after his sophomore year in college that he went on a 20 day trip with his school to Romania and Moldova to do short term mission work. It was on that trip that his Orthodox journey began, consciously anyway. Their mission group attended part of a Liturgy at an Orthodox Cathedral in Romania and he walked away from that Church having enjoyed it and with questions. To make a long story short, he was baptized Orthodox two and half years later.

Thomas asks for your prays and support as he's Orthodox journey continues and he works to share the Orthodox Faith with others.