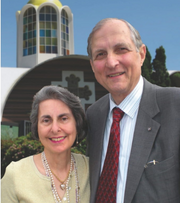 Clifford Theodore Argue was born in Dayton, OH to parents Theodore Argue and Marie Zonars. While Cliff’s father came to Dayton at the age of four, his mother was born in Dayton, both family lines having come out of the same town Saranta Eklissees in Thrace. The family was active in the Greek community and the Church of the Annunciation in Dayton. Cliff served as an altar boy, gaining a strong love of the Church, and making lifelong friends. In 1955, Cliff’s family moved to Glen Ellyn, IL. They attended Assumption Church in Chicago, the largest Greek Orthodox parish in the country at the time.

Cliff graduated from Glenbard High School, where he picked up an enduring avocation for journalism, serving as editor of the school newspaper and writing regularly for a local daily paper. An active Boy Scout, he attended the 1957 National Jamboree in Valley Forge, PA and attended an outdoor pan-Orthodox Divine Liturgy. For the first time, he experienced a service conducted partially in English. Cliff would go on to support and promote both pan-Orthodox cooperation and worship services in English through his articles in various Orthodox and ethnic publications. He obtained his bachelor’s degree in Civil Engineering from Cornell University. While there, he attended St. Catherine’s Church and participated in the campus Orthodox Christian Fellowship, becoming president his senior year.

Cliff married Theodora (Theo) Dracopoulos in June of 1964. Theo was born in Washington, D.C. to Peter and Marianthe Dracopoulos and raised in Chevy Chase, MD. Her father immigrated at the age thirteen from Isari, Arcadia, Greece. Her mother’s family was from Vasta, Arcadia. Theo graduated from National Cathedral School in Washington, D.C. and then from Connecticut College in New London, CT, where she majored in both Philosophy and Art History. After graduating, Theo was as Assistant to the Editor of the Diplomat Magazine, where she proofread the copy and wrote columns on beauty and cookbooks.

After moving to San Francisco, CA later in 1964, Theo continued her career in writing as Assistant to the Director of Public Information for the American Red Cross. Cliff and Theo were members of Holy Trinity Greek Orthodox Church in San Francisco. When they moved to Oakland, they joined Ascension Cathedral and also attended services at a newly-created Orthodox chapel serving students at the University of California in Berkeley.

Cliff had an opportunity to return to Cornell to get a master’s degree in Civil Engineering, with a specialty in Transportation. Upon graduation, he joined the U.S. Air Force, completing Officer Training School at Lackland AFB in San Antonio, TX. After Cliff’s commissioning as a 2nd Lieutenant, he and Theo moved to southern California, where he was stationed at the USAF Space and Missile Systems Organization. They became active at St. Katherine’s Church in Redondo Beach. Cliff served on the Parish Council, on the Building Committee, and taught Sunday School while Theo wrote church publicity articles for the local area newspaper, sang in the choir, and served on the Philoptochos Board as Corresponding Secretary.

In early 1968, Cliff was sent on a special assignment to South Korea, which allowed him to experience Orthodox foreign mission work firsthand and he learned about their ongoing struggles and appreciation for the help beginning to arrive from the U.S. Upon his return, Cliff wrote articles about the Korean Church and began speaking at various parishes and organizations throughout the U.S. After his service in the Air Force, Cliff started his long career in the airline industry in 1970, first with Continental Airlines in Los Angeles, and then as Alaska Airlines’ Vice President of Properties and Facilities in Seattle.

Cliff and Theo moved to the Seattle area in 1983, settling on Mercer Island, WA with their teenage daughters. The family became active members of St. Demetrios Greek Orthodox Church. Cliff again taught Sunday School and was President of the Board of All Saints Camp and Retreat Center. Theo has managed the church bookstore starting in 1985, was on the dance board and has supported the work of Philoptochos and now is on its board. She worked with the Parish Council on the creation of a permanent St. Demetrios Bookstore. Theo has been a correspondent for Hellenic newspapers: The Western Hellene and The Hellenic Journal. In addition, both Cliff and Theo serve on the Advisory Board of the Greeks in Washington, a virtual history museum.

Making frequent trips to Alaska, Cliff became familiar with the extensive Orthodox presence throughout the state that was started through Russian missionary activities in the late 1700s. Cliff served several terms on the Board of Trustees of St. Herman’s Theological Seminary in Kodiak, AK, and led two pilgrimages of OCMC Board members to the state.

Cliff has served on many committees and councils over the years. In 1977, he was invited to join the Missions Committee of the Greek Orthodox Archdiocese (the future OCMC). After Fr. Alexander Veronis, Cliff remains the longest serving member. He has been on the Board for the Orthodox Christion Mission Center for 45 years in various roles, including two terms as President. Together, Theo and Cliff have visited OCMC Missionaries in Korea, Albania, Romania, and Alaska. They have hosted numerous missionaries and OCMC staff, arranged speaking engagements, and orchestrated fundraising opportunities in the Seattle area.

Cliff was a founding member of the Metropolis of San Francisco Commission for Orthodox Missions and Evangelism, now known as the Missions and Evangelism Ministry, which focuses on domestic outreach. In 2004, Cliff was invested as an Archon of the Ecumenical Patriarchate, Order of St. Andrew the Apostle and given the title “Eftaxias” The same year, he was also appointed by Archbishop DEMETRIOS of America to the Archdiocesan Council, where he chaired the Communications Committee for 16 years. Most recently, he was honored by Archbishop ELPIDOPHOROS of America as a “Senator for Orthodoxy and Hellenism.”

Wherever Cliff and Theo have lived, they have been active in the Orthodox community, serving to the best of their ability to promote the faith in whatever way the Lord has led them. The two celebrated their 57th wedding anniversary last summer and have been blessed with two daughters and sons-in-law: Christina and Dennis Thomatos in Novato, CA, Irene and Tom Christy in Troy, MI, as well as three teenage grandsons, Peter and Marc Thomatos and Perry Christy.